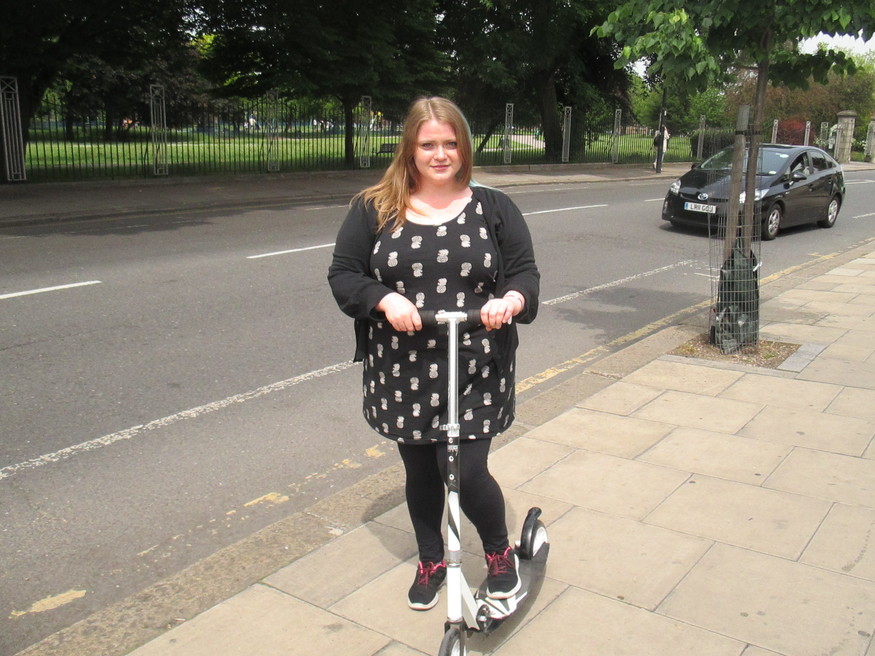 The author, taking a scooter for a spin

Most Londoners are settling into a routine of working from home, or finding unique ways to fill their days such as online improv classes. But over a million key workers with roles that are essential to public health and safety are still travelling to work each day. Although the congestion charge has been lifted making it easier for those with cars to stay safe, hundreds of thousands of NHS workers, teachers, food producers and others are using public transport each day.

For absolutely essential journeys undertaken by people without cars, there are viable alternatives to getting the tube. I tried six of them to see which was the best, considering ease of use, cost, speed and applicability.

I undertook this challenge in the summer of 2019 purely to see if there was a way I could save money and not start my day with my face lodged in a stranger's armpit. But during the coronavirus pandemic, alternative means of transport could be a prudent option for those truly unavoidable journeys. 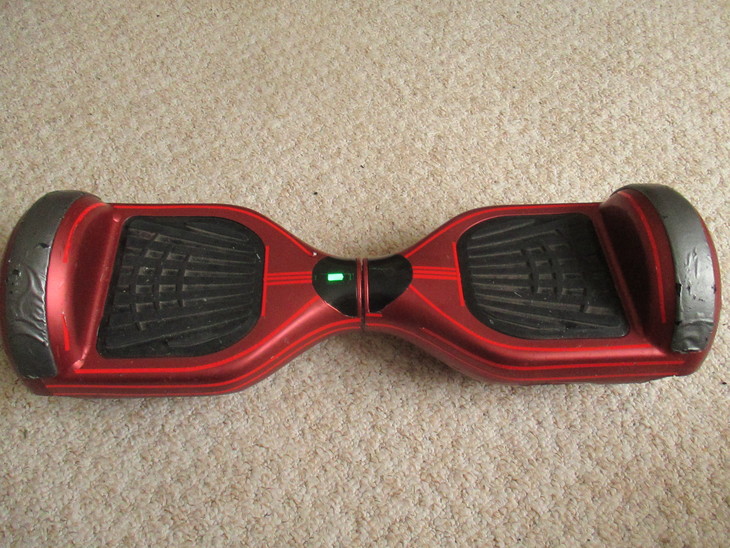 We give you: The Swegway

While London boasts active communities of unicyclists, miniature moped riders and jump stilt enthusiasts (pogo sticks for your feet) I decided against anything too specialised as I wanted to focus on transport modes that were user-friendly and reliable. I also attempted a scientific approach by testing each vehicle for two hours and recorded my top speed using my phone's handy speedometer.

I was pretty optimistic. Perhaps I could find a new travel operandi that didn't involve an oyster card or a stranger's body odour. 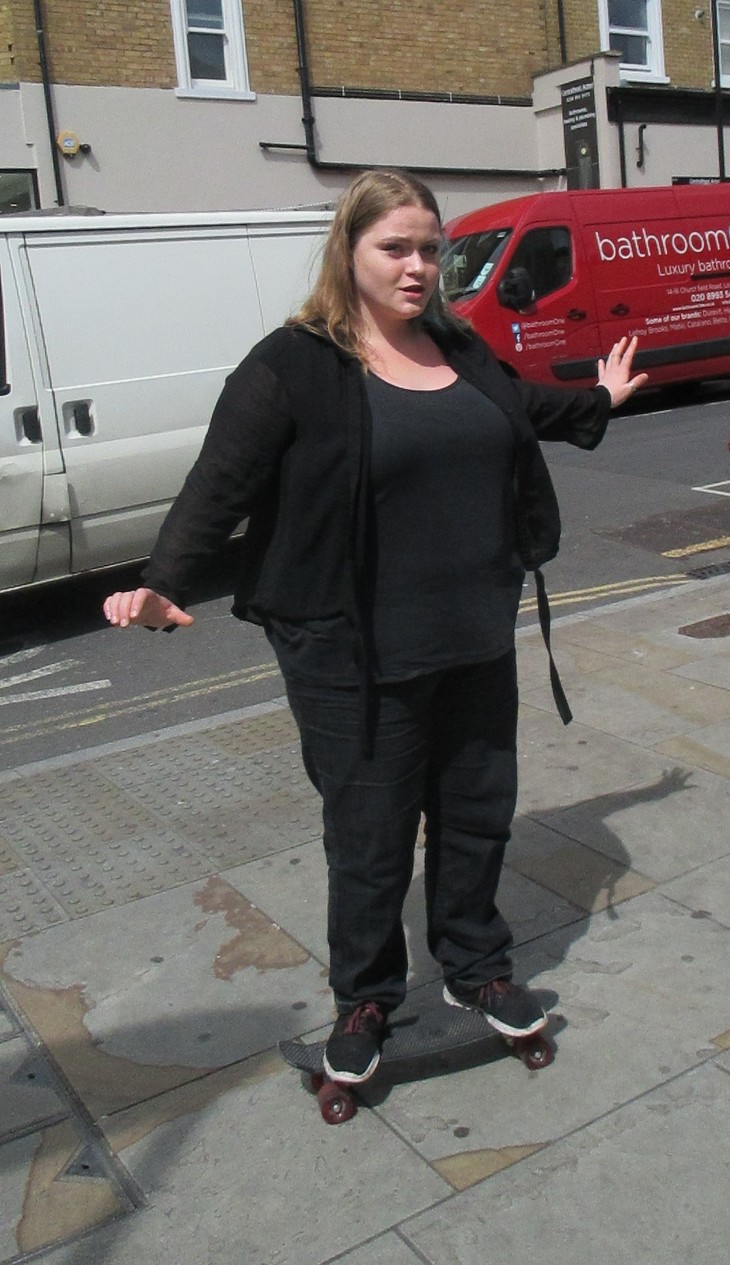 Rather like the skateboard's hip younger sibling, the penny board is smaller, lighter and more flexible than its wooden predecessor. Starting at around £25, these creations are made of plastic making them able to withstand immense force and gather speed very quickly. I discovered this last feature quite by accident. On I stepped and off it sped, leaving me sprawled on the pavement like an inebriated starfish. However, with the help of a sturdy wall I managed to get myself on and tentatively began pushing myself along with one foot. After many false starts and stumbles, I eventually got into a decent rhythm and peaked at 6mph. Although this is an accessible and cheap way of getting around, I'd need a fair bit of practice before choosing it over a bus. 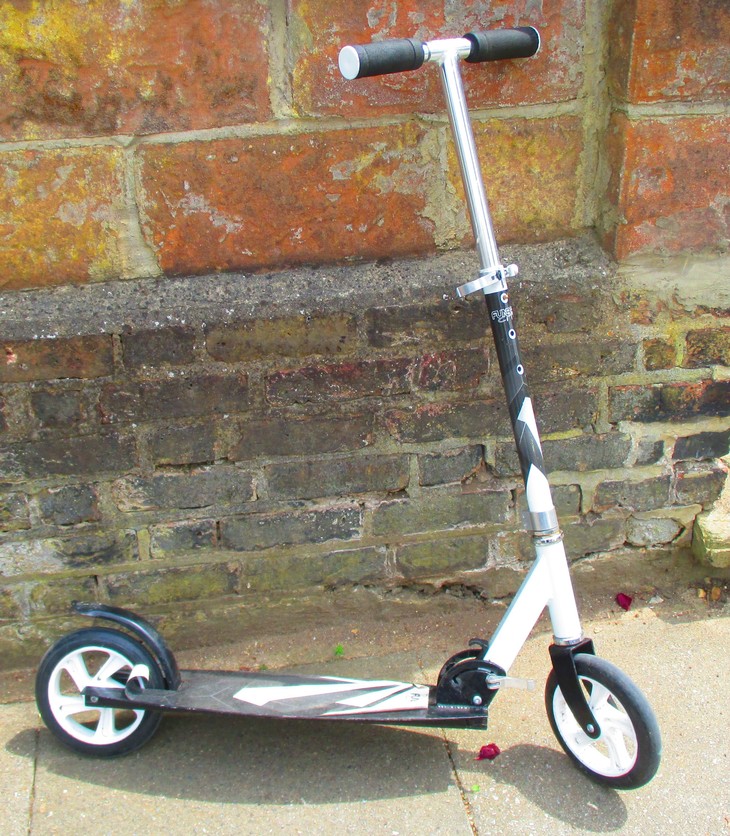 Not just for kids, the scooter has become a popular choice for those shunning public transport. I was slightly sceptical, having always placed scooters in the same category as space hoppers and Heelys. But what do you know; once I got my balance this turned out to be a smooth and efficient ride. Starting at roughly £80, the scooter's handle bars and added foot grip meant I felt very secure. Also the steerable front wheel made corners easy and I was soon whizzing along at 9mph. Scooting required no real skill, it was easy to manoeuvre around pedestrians and it took minimal effort to work up a good pace. Apart from not having any brakes, the only real obstacle was refraining from yelling "wheeee!" as I went down hills. 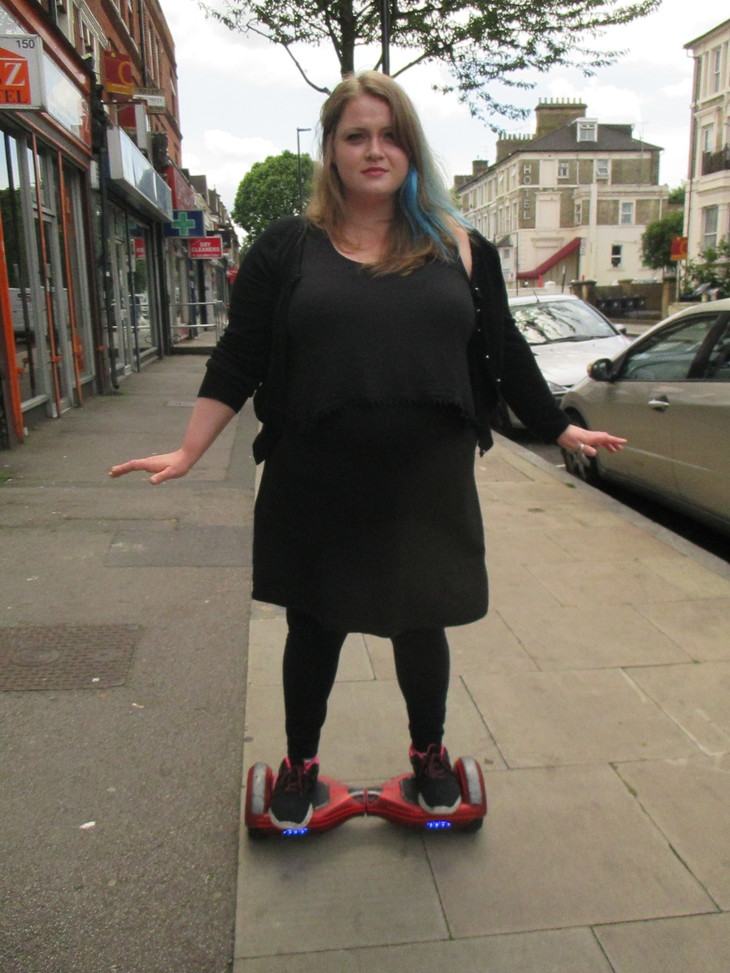 Back II to Future predicted hoverboards - we got the Swegway instead

Perfect for lazy Londoners, the humble bike has been given a high tech makeover. While some footwork is required, the battery powered engine applies a supplementary force to the e-bike's wheels. Once on the road, a simple twist on the handlebars seamlessly engaged the battery and the bike accelerated to 23mph without me even breaking a sweat. Just like analogue versions, there are countless e-bike designs to suit different terrains and cycle needs. The main drawback is the price, starting at around £1,000 for an adult model. However, as a primary means of transport, this seems a worthwhile investment, especially if your journey involves a lot of hills. 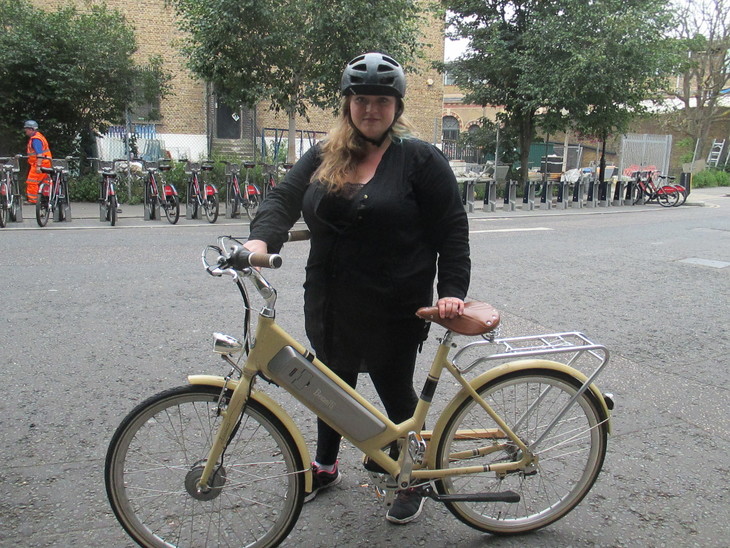 Commonly known as hoverboards, these gizmos interpret tiny shifts in weight as motion via their gyroscopic sensor pads. A slight lean sends the board gliding in that direction, a steeper incline increases the speed. Caution is advised as an unconscious twitch can easily send you spinning off into the sunset. But once I'd mastered the mini ankle flex and inward knee tilt I was soon skimming along the pavement at 7mph. Starting at £150, the Swegway can reach up to 10mph and is fairly easy to master. However, it's obvious why our former mayor's Swegway rental scheme didn't go through. A small pebble or pavement crack is more than the board's small wheels can handle, and off the rider trips bruising their ankles in the process. It also requires several hours of charging which will transport the user for a maximum of 10 miles. The Swegway remains more of a toy than a viable transport method, but is a great chance to channel your inner McFly. 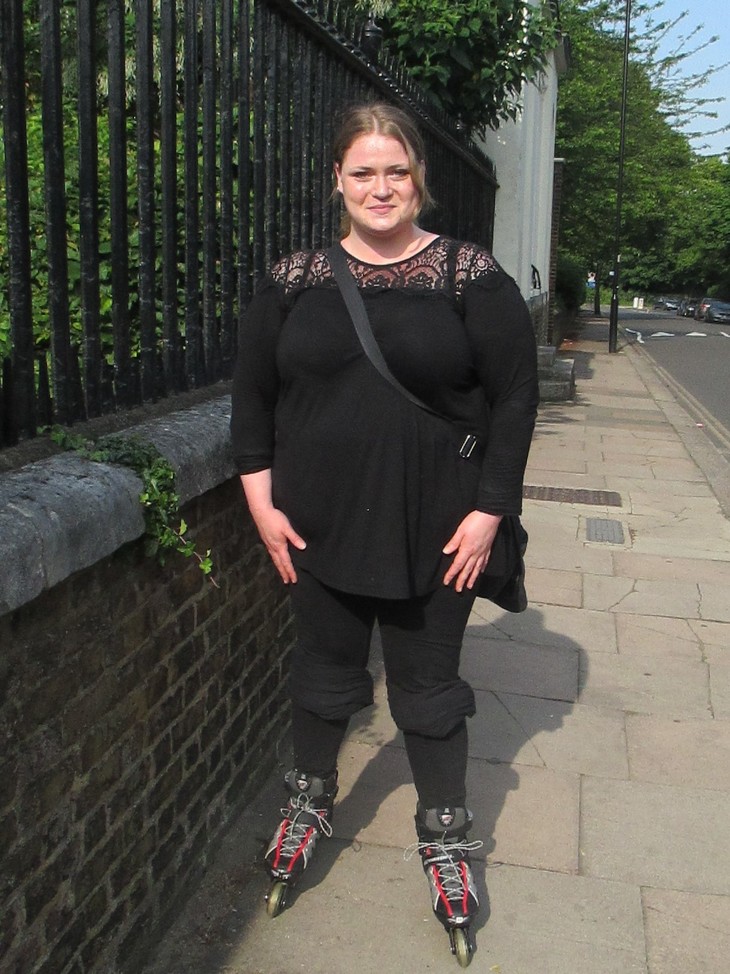 Any London commuter will have encountered the following spectacle. A besuited executive calmly propelling themselves along the pavement with graceful jabs and lunges from their skate-encased legs as they sneak glances at their iPhone. First marketed by Louis Legrange in 1849, the single line of wheels is meant to allow the seamless gliding of ice skating but on terra firma. But of all the modes I tried, this proved to be the most challenging. During my practice session in a park full of amused schoolchildren, I wobbled, stumbled, staggered and toppled over repeatedly. I fell forwards onto my knees, backwards onto my bum and crashed painfully onto my side. I did however achieve my childhood dream of doing the splits.

After two hours, I found myself on the pavement, pulling myself forward with the aid of an adjacent fence. I peaked at 2mph and breathed a sigh of relief when I took off the blades of shame. Starting at around £50, rollerblades are a fantastic and ingenuitive way of getting around, especially as they take up the same space as the body — making them easy to transport and easy to store. However, rollerblading is an acquired skill and anyone planning on skating to work will need to put some serious time into mastering the dynamic footwear. 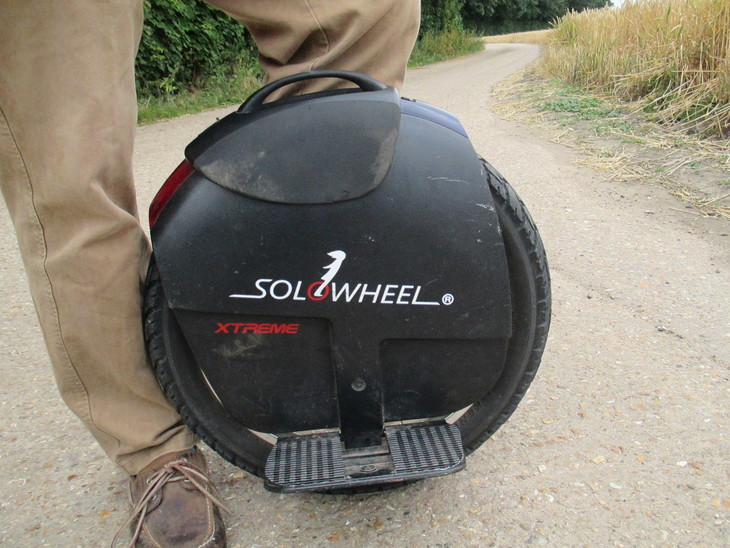 This rather ingenious gyro device works on the same self-balancing principle as the Swegway, and consists of a single wheel with two platforms either side for your feet. Sometimes called an electric unicycle, the Solowheel can glide along for 10 miles on a one-hour charge and has a useful handle for transporting. I contacted a UK based retailer named Robert who very kindly let me try out the electric vehicle at his home. While Robert's children zoomed about the garden on their one-wheeled chariots, I clutched onto Robert's hands as he told me to lean forward and find my centre of gravity. 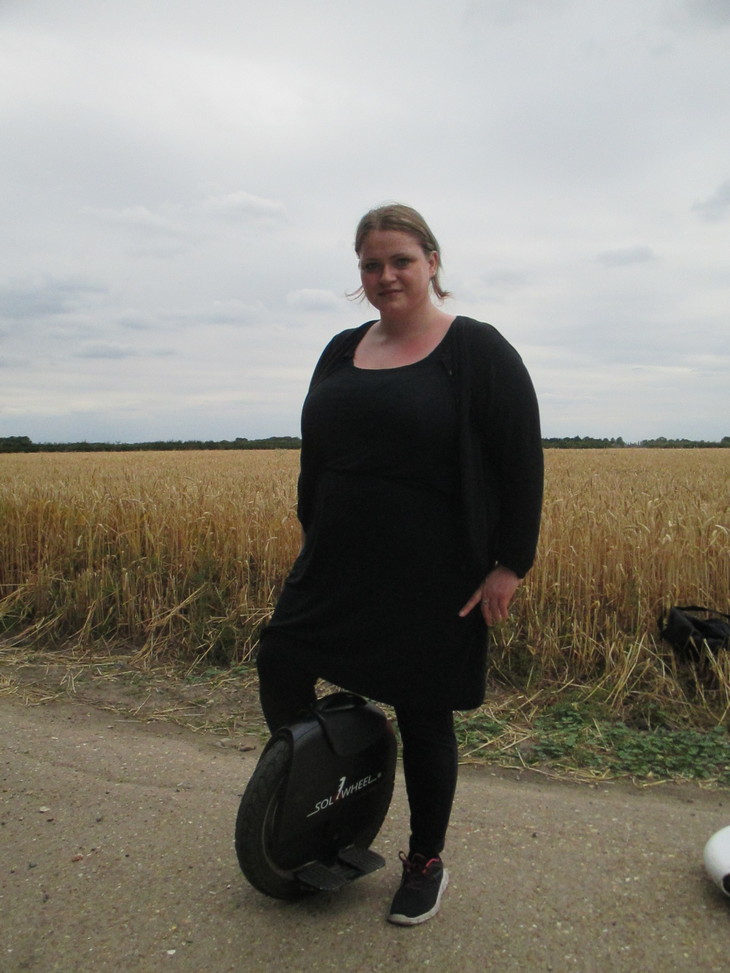 I remain eternally grateful for how patient Robert was with me; not many people would put up with a grown woman shrieking "Please don't let me go! Don't let me go!" at them on their day off. Once I felt more confident and had worked out that leaning with my legs rather than my torso gave me more control, I managed to get up to 6mph, although it can reach top speeds of 14mph. The Solowheel is great fun and surprisingly sturdy, coping well with different terrains. The main downside is its price, starting at around £700. As the vehicle can only travel 10 miles per charge, it is best suited to people with shorter commutes.